The Oswego Volunteer Fire Protection District began as a village fire department after a fire that destroyed the Congregational Church in Oswego in 1893. On July 17, 1895 the village purchased a hose and hose cart, and by August 28 of the same year, a fire company was formed. A hose house was added to the town council house at 65 Washington Street in June of 1897. In 1898 a bell was placed in a tower atop the house to signal the fireman for a call. **This bell stood in front of Station 1 on Main Street in downtown Oswego until the end of 2009 when the fire district moved into a new facility on Woolley Road, where the bell once again is proudly displayed at its new home at the entrance of the Oswego Fire Protection District Central Fire Station at 3511 Woolley Road.

Following a devastating fire that destroyed several buildings at a local farm, area farmers decided something had to be done to protect their interests. In 1936, the Oswego Fire Protection District was formed by voter referendum, covering all of Oswego Township and part of Will County. The district now also covers the majority of Na-Au-Say Township and a portion of Bristol Township. Andrew Pierce, Glenn Leigh, James Steward and Wally Davis were appointed the first commissioners.

In May of 2011 the Oswego Fire Protection District transitioned once again with the retirement of its last volunteer Fire Chief, Brad Smith, and the appointment of its first full-time career Fire Chief, Rick Neitzer, who had been one of the original six fulltime paramedic/firefighters hired by contract back in 1986. Although no longer used to cover every call, the volunteer program itself was still relied on heavily through 2012 for supplemental manpower and experience during heavy volume times and all general alarms within the district. Over the course of time the volunteer program has slowly transitioned into what is now a part-time firefighter program, where non-commissioned firefighters have the opportunity to work part-time shifts supplementing daily staffing and working side-by-side with the full-time firefighter/paramedics. And for those new to the fire service, hopefully gaining meaningful experience and growth as they pursue the fire service as a full time career.

As we enter 2020, the Oswego Fire Protection District has approximately 64 sworn firefighter/paramedics on the streets being supported by three Battalion Chiefs, one Support Services/Administration Chief, one Operations Chief, one Fire Marshal, one Training Officer, one EMS Coordinator, the Fire Chief of the department, five Board of Trustees members, and three Fire Commissioners.

With a thank-you to Roger Matile, additional information about the early history of organized firefighting in Oswego can be found here 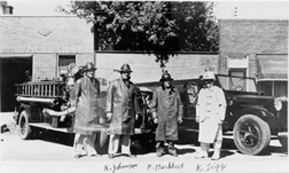 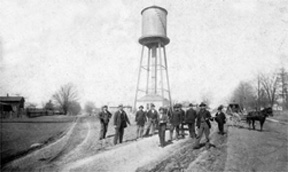